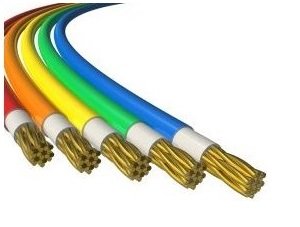 The world of power and control cable is complex: there’s a huge range of cable types and associated cable acronyms. Here’s a brief overview of some of the most common cable acronyms and what they refer to.

PVC (Poly Vinyl Chloride) is a synthetic plastic material which is the most common material used for cable insulation. It’s widely used for both control and low voltage power cables.

PVC cables are available in various temperature ratings including V-75 (75°C), V-90 (90°C) and V-90HT. The higher ratings can continually withstand higher temperatures, but only in certain conditions where they are mechanically protected. PVC tends to soften at high temperatures which can increase the risk of mechanical damage and subsequent safety hazards. In the case of a fire, PVC emits toxic fumes and smoke which can become very hazardous to persons in a confined space.

LSF denotes Low Smoke and Fume – a special type of PVC cable insulation which is designed to emit much less noxious fumes and smoke in the case of a fire or high temperature situation. It’s often used in public areas and confined spaces such as underground railway stations, where the potential likelihood of toxic fume inhalation is higher.

XLPE is an abbreviation for Cross(X)-Linked PolyEthylene – a polymeric insulation material primarily used in power cables. It offers a higher temperature rating than PVC – typically 90°C – but doesn’t soften like PVC at these temperatures, so is much safer and capable of carrying higher currents.

SWA stands for Steel Wire Armoured – power cable with an additional layer of steel or aluminium material to offer additional mechanical protection. It’s mechanically very tough and can be buried directly underground or used in applications where severe mechanical stress is present.

MIMS is an acronym for Mineral-Insulated Metal Sheathed cable. It’s a special cable which uses powder inside a metal sheath for insulation. Because the cable doesn’t use any plastic as insulation, it is very resistant to fires. MIMS cable is usually only used for critical applications such as fire alarm systems and hospitals, or where high ambient temperatures or radiation exists, such as near furnaces or nuclear reactors.