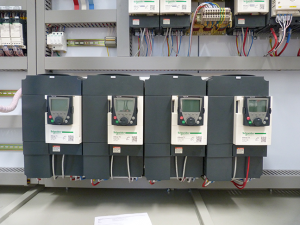 The electrical world is full of acronyms.

One of the more common confusions is the VSD/VFD/VVVF question.

What is the difference between a VSD, a VFD and a VVVF? Or are they all the same thing?

The difference in the terms revolves around the type of motors they can control. The two types of electrical power that electric motors use are AC and DC.

AC is alternating current – normal mains power at 240 or 415 volts (AC power is also used at other voltages, both extra low and very high).

VSD starts for variable speed drive. It’s an all-embracing term which can describe drives used to control both AC or DC motors, or technically even mechanically controlled speed devices.

In actual everyday usage, it’s most commonly used in the context of electric (AC or DC) drives.

A VFD is a variable frequency drive. The term refers specifically to electronic drives controlling the speed of AC motors – by adjusting the frequency and voltage delivered to the motor.

Most commonly, the terms VFD and VSD are interchangeable.

The term VVVF is often used in the mining industry – it refers to a variable voltage variable frequency drive.

It describes exactly the same AC drive as the term VFD – any AC drive will automatically control voltage to suit the frequency it is running at.

To add to the confusion, the same devices in the HVAC / mechanical services industry are often called frequency inverters or just inverters.

Once again these terms refer most commonly to AC drives.

So which should I use?

It’s most common for industrial control systems to be AC-powered.

In this case, the three acronyms are interchangeable and all refer to the same thing.

In the case of a DC control system, the correct term is most likely VSD.

Or, in the HVAC or mechanical services industry, AC drives might be referred to as inverters.