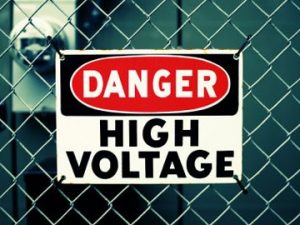 Trick question. Voltage alone is not the only contributing factor to the severity of an electric shock. Current, normally measured in amps, is also a critical part of the equation, along with other minor factors.

So the question really should be: How much current does it take to kill someone?

The answer is very little. A current of as little as 0.007 amps (7mA) across the heart for three seconds is enough to kill. 0.1 amps (100mA) passing through the body will almost certainly be fatal.

However, the current involved in an electric shock is determined by the voltage and the resistance of the circuit. The human body has an inherent high resistance to electric current, which means without sufficient voltage a dangerous amount of current cannot flow through the body and cause injury or death. As a rough rule of thumb, more than fifty volts is sufficient to drive a potentially lethal current through the body.

Other factors that can determine the severity of an electric shock include the duration of the shock and where the shock enters the body. For example, a shock passing from one arm through the chest to the other arm is much more dangerous than a shock between two toes.