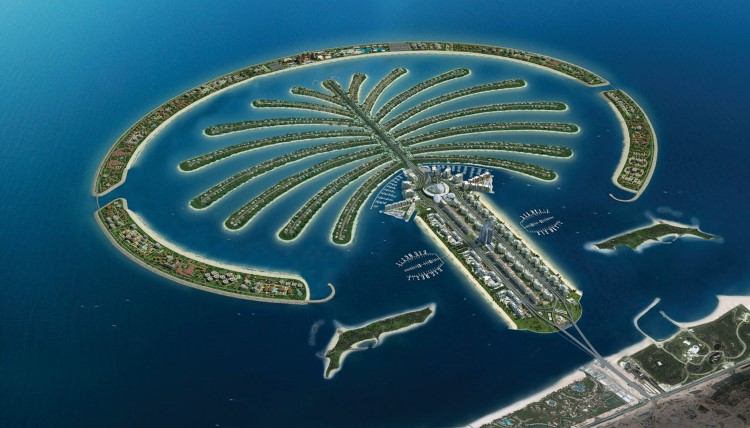 The primary objective behind the construction of the Palm Islands was to compensate for a decrease in revenue from oil by creating a major tourist destination in Dubai.

Construction of the islands was completed in a mere four years.

Some 40,000 workers were hired for the actual construction work on top of the island, working 12 hour shifts.

Waves up to 2 metres high and the constant motion of the sea creates a unique and challenging construction environment.  To minimise movement, wave blockers were built all around the palm island: 3 meters high and 160 kilometers in total length.

Potential liquefaction of the sand, due to movement of rocks and sand below the surface and possible earthquakes posed a significant challenge.  Liquefaction occurs when water pushes up between loose sand particles, liquefying the ground, causing the island to sink into the sea.  Vibro-compaction methods were used to compact over 2000 holes with vibrating probes. 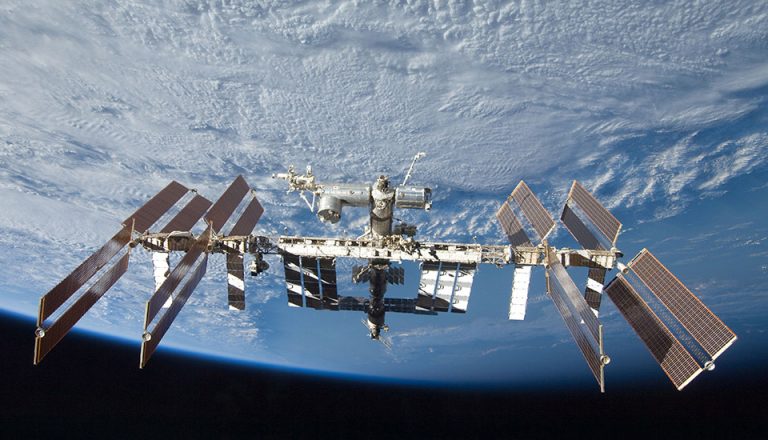 The largest artificial body in orbit, visible with the naked eye from Earth, and permanently inhabited, the International Space Station is an engineering marvel that seemed impossible only a few decades ago.

It is used as a micro-gravity and space environment research laboratory, where crew members conduct experiments in biology, physics, astronomy, meteorology and other fields. It serves as a testing ground for spacecraft systems and equipment for Moon and Mars missions.

Assembly in space began in November 1998. By June 2011, they had added 159 modules during more than 1,000 hours of EVAs (extravehicular activity – meaning astronauts outside the spacecraft). This made a very unusual construction site, located 354km above Earth.

The International Space Station travels in orbit around Earth at approximately 17,150 miles per hour, meaning it completes an orbit every 92 minutes. The speed is governed by the height above Earth – anything else in orbit at the same height would travel at the same speed.  As there is no ‘air’ in space, there are no forces acting on the craft: crew simply feel like they are floating.

A crew of six people typically live and work for several months at a time. The station has been continually occupied since November 2000, and over 250 people from 18 countries have visited since then.

If you’ve got plenty of spare cash, you could visit. Space Adventures has sent 8 people since 2001, but expect around $50 million for a 10 day trip.

Transporting crew and cargo to and from ISS is no light matter and very expensive.

Working in space (EVAs) involves its own risks, with any damage to a spacesuit potentially causing instant death.

While the ISS is partically protected from solar wind by the Earth’s magnetosphere, solar flares are still a hazard to the crew, who may only receive a few minutes warning to seek refuge.  Without the proper protection of Earth’s atmosphere, crew are significantly more exposed to radiation, resulting in a higher risk of cancer.

Meal times aren’t as enjoyable on Earth. Everything is vacuum sealed in plastic bags and with the reduced sense of taste in a micro-gravity environment, this processed food isn’t exactly the most enjoyable experience.  Great care is taken to ensure food does not create crumbs.

Working in a cramped environment, often with crew that speak other languages causes considerable stress over time. Cosmonaut Valery Ryumin wrote in his journal during a particularly difficult period on board the Salyut 6 space station: “All the conditions necessary for murder are met if you shut two men in a cabin measuring 18 feet by 20 and leave them together for two months.” 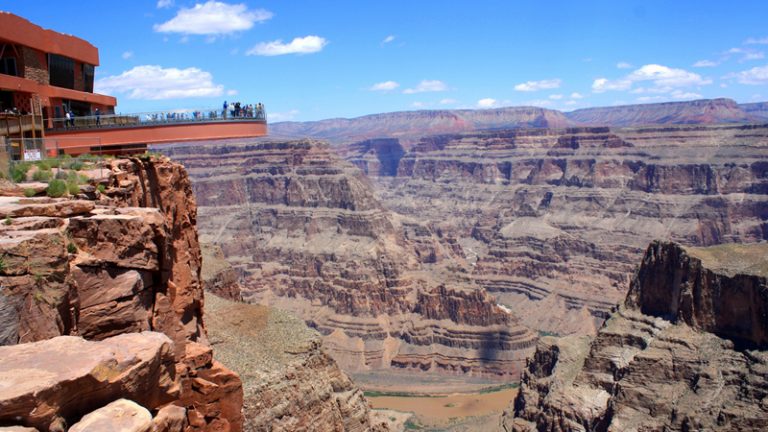 The Skywalk is a massive horseshoe walk canter-levered out over the Grand Canyon, over 1km above the river below.  Completed in March 2007, it was built by David Jin, a Las Vegas businessman in partnership with the Hualapai tribe of Native Americans.  He hoped it would be a catalyst for continued development of the area: opening up a 160km stretch of the canyon to include hotels, restaurants, golf courses, etc, and help combat a 50% unemployment rate amongst the Hualapai residents.

The Skywalk can hold a total weight of over 36,000 tonnes, the equivalent weight of 71 fully loaded 747 aircraft.

The walk canterlevers 21 metres from the cliff edge and is designed to withstand 8.0 magnitude earthquakes.

42 tonnes of glass and over 500 tonnes of steel were used in the construction.  Everything was constructed onsite.

The bridge was constructed on safe ground first, then rolled into position – no small feat considering the walkway weighed 800 tonnes.  The structural engineer onsite explained: “We rolled the structure on padded, steel bars and hooked up to two trucks that would pull away from the cliff. This movement would launch the cantilevered beams and glass deck out over the cliff” adding that they also had two “stopper” trucks in place, “just in case.” And, they “also placed heavy counterweights on the box beams so that when the structure moved into position it didn’t fall over the cliff. It took some pretty creative thinking from a number of companies to move that bridge out to position.”

The floor of the walk is glass, to provide a view directly down. Four layers of glass were used, with three layers of DuPont SentryGlas interlayers between, making up a total thickness of 50mm.

Everything was constructed onsite, including kilometres of deep-penetration welding, with every individual weld undergoing stringent testing and x-ray examination to ensure their integrity. 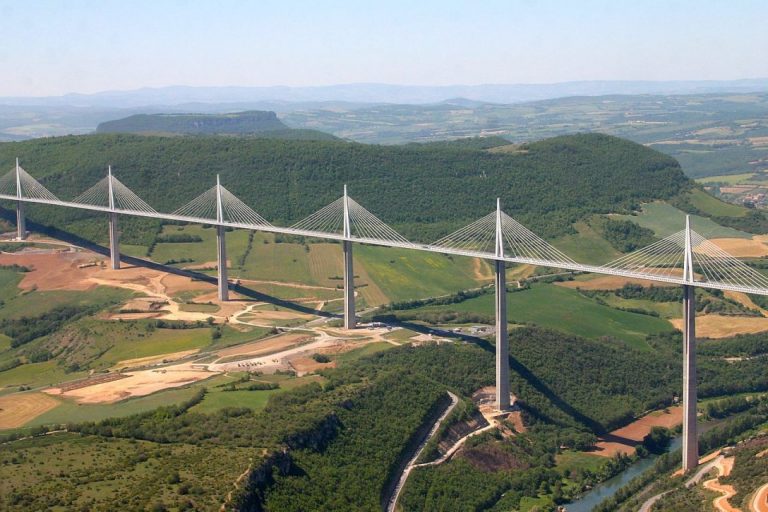 Opened in 2004, the Millau Viaduct spans the River Tarn near Millau, France. It is the tallest bridge in the world, standing at 343 metres tall, making it taller than the Eiffel Tower.

An award winning structure, the Millau Viaduct is part of the A75-A71 route from Paris to Beziers and has been ranked as one of the great engineering achievements of all time.

Approximate cost of construction was $570 million.

Working 270m off the ground in the middle of a valley where wind speeds reach up to 150km/hour isn’t for the faint hearted. Likewise, winds of this speed would cause serious issues driving on the bridge, so the design involved wind screens to significantly reduce the impact.

After constructing each of the pylons and erecting temporary intermediate pylons, the bridge deck was ‘slid-out’ from one pylon to the next. Movement of the deck was accomplished with a computer-controlled hydraulic system. Since the weight of each deck section caused it to bend down as they canter-levered across the space to the next pylon, a ‘nose recovery system’ was implemented to help pull the nose of the deck up to the level of skates opposite.

Each pylon is under immense stress, particularly pylon P2, the tallest of all. 12 fibre optic extensometers and several other electrical extensometeres were installed on plyons P2 and P7, measuring movements to the accuracy of a micrometre and capable of taking 100 readings per second. 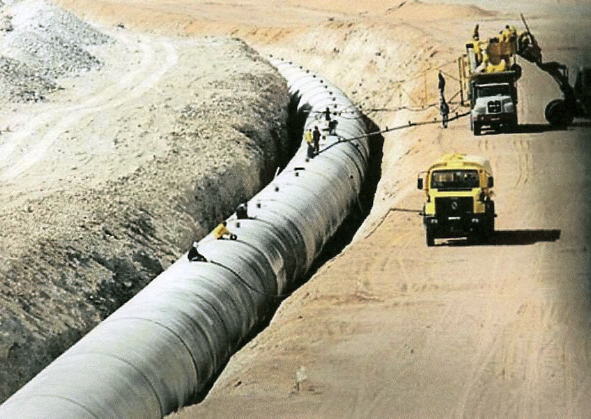 The Great Man-Made River of Libya

The largest underground network of pipes and aqueducts in the world, the Great Man-Made River supplies 6,500,000 litres of fresh water per day to cities of Tripoli, Benghazi, Sirte and elsewhere in Libya. The system draws from massive ancient underground water aquaifiers which were discovered when searching for new oilfields in 1953.

The project is owned by the Great Man-Made River Project Authority and was funded by the Gaddafi government.

It was called the “Eighth Wonder of the World” by late Libyan leader Muammar Gaddafi, who his dream was to provide fresh water for everyone, and to turn the desert green, making Libya self-sufficient in food production.

This project significantly improved quality of living throughout the country. With the country now reeling under civil war, the future of the Great Man-Made River Project is in jeopardy.

Pipes had a diameter of 4 metres each

250 million m³ of excavation was required.

Construction through the deserts of Libya pose the usual challenges of extreme high temperature, low humidity and vast distances.

The pipeline needed to be buried below the desert sands to prevent evaporation.

A fleet of more than 100 trucks transported sections of pipeline a combined 150 million kilometres: equivalent to the distance between the earth and the sun.

Construction work was tendered for each phase, with many overseas companies taking up contracts.