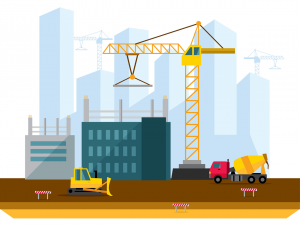 How’s the Australian construction industry going so far in 2017?

The results show continued sluggish conditions across all sectors, with the overall figures indicating a fourth consecutive month of slow contraction, although January is starting to edge toward expansion again.

Let’s dive into the report and take a look at what’s happening in the four construction sub-sectors (houses, apartments, commercial and engineering / infrastructure).

The residential house building sector has been slowly declining over the last five months. In January this has stabilised however, coming in at 50.2 points.

Hopefully this figure indicates some expansion throughout 2017.

After a boom in the early second half of 2016, apartment building has fallen back into contraction with a figure in January of 46.5 points.

This is up slightly from last month however, so conditions may continue to be stable in 2017.

The commercial construction sector has also been contracting for the last five months. January’s figures show an index of 47.5 points, showing a further slowing into contraction compared to December.

Engineering includes infrastructure such as roads, bridges and utilities. January showed an increased contraction on the back of the last three month’s slowing results, down to 42.8 points.

This reflects the impact of the continued downturn in mining investment and heavy industry.